This feature allows you to restrict a playfield to a certain origin, factions or player.

How to activate it:

First, set up the restrictions in the "Playfields" list

Belongs to Origin should be 999 if not set. there is a button on the bottom to reset them all in case they are on 0. If you want to set up a restricted Playfield for a origin: Enter the Origin Number in "Belongs to Origin"

If you want to set up a restricted Playfield for a faction: Enter the Faction abbreviation in "Belongs to Faction"

If you want to set up a restricted Playfield for a player: Enter the player Steam ID in "Belongs to Player"

Then go to config and activate "Playfield Faction Restrictions" 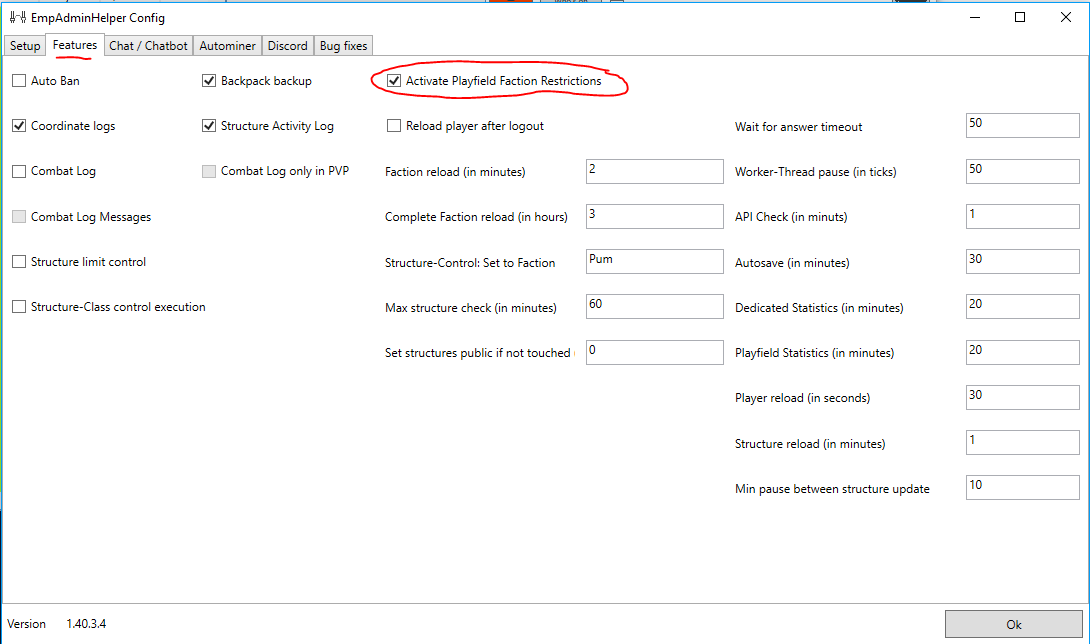 Keep in mind: Admins are protected. So if you want to test it you should set your role to "Player" to feel it ;).

How does it work?

This function will warp the player and his ship (if still in cockpit) back to the next possible/valid Playfield.

Last allowed Playfield: Is set each time a Player enters a Playfield and the playfield is not restricted for him at that time. Playfields marked with "Prevent Structure Data Collection" (like Instances for example) are not saved as "last allowed Playfield". Meaning: The Player would never be warped back there.

In case a player starts on a wrong Playfield, or you apply those settings during a running Game (where the current Playfield of the player was still valid, but not now anymore) this might cause trouble. So make sure that no Player who is not allowed to be on that Playfield is there when you add the Playfield as a restricted Playfield.